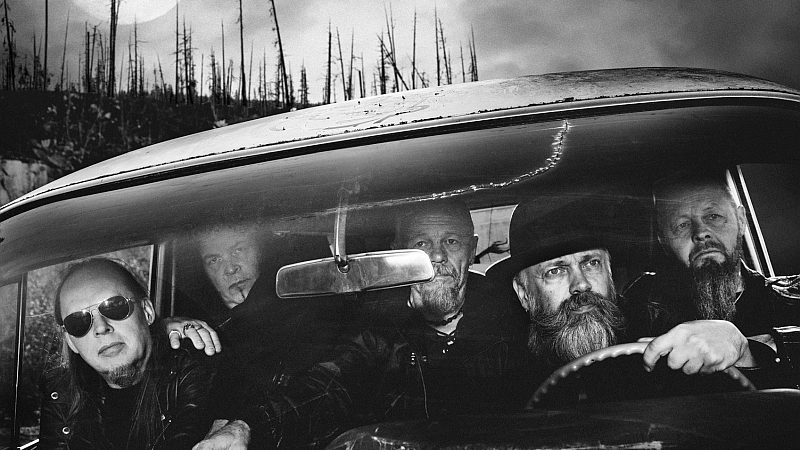 Leif Edling: “Without a new album it is easy to become a retro band pretty quick. Don’t want that to happen to Candlemass.”

Hello Leif! Candlemass just finished a series of live shows with Ghost. What about this experience of sharing the stage with a much younger and popular band with different music?
Don’t think their music is that different to be honest. Sure, they have pop choruses and stuff, but they have those really hard riffs as well. The Ghost audience varies, absolutely, from pop kids to elderly metalheads. Been great to play for them. They appreciated us even more than we expected!

You have been away from touring for a long time. How did it feel to perform on stage again?
Absolutely great! We gave everything during our set, it was for 45 minutes and we could really deliver our epic doom metal for an audience that was not our own. We did great night after night. Was a very cool experience. Good to be back.

In 2012, when ‘Psalms For The Dead’  came out, it was announced as the last studio album of Candlemass, but the band remained playing live. What was the reason for this decision in 2012 and how did you finally decide that it was time to change your mind?
The ‘House Of Doom’ single. It was great fun to write it! Also working with producer Marcus Jidell was fantastic. We’re quite a team I must say! There I got the inspiration back for an entire album. We had a couple of band meetings about it, it was very clear that the band shared the enthusiasm for a record. They had been playing live without me for a couple of years, with good response, but without an album it is easy you become a retro band pretty quick. Don’t want that to happen to Candlemass.

Can you recall the moment when you had written something of which you thought: this is not for my other bands/projects, but a new Candlemass song? Or didn’t it happen like this?
Everything I wrote after the ‘House Of Doom’ maxi was aimed for Candlemass. I went into the bubble and wrote and worked very hard for eighteen months in total with this. The HOD single took six months to do, the album twelve. Marcus even had to tell me to stop, hehe… I just kept on writing and coming up with new ideas for the record. We had more than enough material. Sometimes you need to know when to stop. That’s a good insight…

Can you tell something more about this writing process for ‘The Door To Doom’ which was preceded by two EPs with new stuff?
The ‘House Of Doom’ maxi was done May/October 2017. We started the demoing of the new songs on November 1st and finished the album November 30th 2018. A year in the studio, give or take. We demoed about a song a week until we had maybe four tracks done. Then they came and listened. We continued to demo while the band got the songs and learned them. Normally we would have been rehearsing, but since I was still sick with the fatigue syndrome thing I couldn’t rehearse. We had to do it this way instead. But it worked. People learned the songs and I think we did the drums in April. After that Mappe put guitars on, I worked on the bass, Lasse did his guitar. It was a puzzle, but it is the result that counts. Me and Marcus worked our asses off in the studio with the songs for a long time, but it couldn’t have been done any other way. But it is also a band effort. Just listen to the playing… damn!! A band on fire!

Mats Levén replaced Rob Lowe when Candlemass became a ‘live only’ band and he could be heard on both the new EPs. What was the story behind replacing him by your first singer Johan again for ‘The Door To Doom’?
During the recording we felt something was missing. We’ve had too many discussions and arguments over the year. All of us. Maybe some heart was missing in it all. I had worked my ass off for this record but was struggling with my health. Too much work… too much business… too many arguments… much bull!  In the end we took a band decision to bring in Johan again. Go back to the ground zero of Doom so to speak. Mats had done a great job, but we needed to do something in C-mass, find the spark again, and Johan was the answer. Now we focus to have fun, and not let any business take over. I have no clue if it will last a year or two. At least we will enjoy the time left…

Was it an easy job or difficult to convince Johan to come back, since I remember initially you wanted him to stay after ‘Epicus Doomicus Metallicus’ as well?
Johan was pretty easy to convince this time around hehe. Think he was ready to have some fun! Mappe phoned him and in just a day or two he came to the studio and it felt like he had never been away.

How much contribution of other members of the band did you allow when creating and writing and arranging the songs for the new album?
This time I did everything. Marcus Jidell (the producer) has some ideas on the album as well, but mainly it is my songs and input. I worked hard as hell on the arrangements this time. Tried to make them interesting as well as with a no bull attitude. The concept was really to take things out instead of putting stuff in. Less is more so to speak. I took out some instrumental parts, intros, a riff here and there, think it worked. The album is trimmed down to a hard fist in your stomach! A kick in the groin!

What can you tell about the lyrics? Is there a kind of concept? Which ones are most personal?
I like all the lyrics on the album. Many of them are personal, but a couple just stories about giant sea monsters plus doomsday cults and the pros and cons of dealing with the devil. The most personal are probably ‘Under The Ocean’ and ‘Bridge Of The Blind’.

The album really left me in awe. I expected top quality, but this goes beyond. This is also due to softer parts of songs and a track like the sensitive ‘Bridge Of The Blind’. It has a transparent charm you can only find in sensitive songs of a heavy band in the seventies or eighties. What can you tell about this song and the soaring side of Candlemass?
Yeah, it’s the first hard rock ballad we do. It is in a way a homage to the metal ballads of the eighties with great songs like ‘I Believe In You’ (Y&T), Dio’s ‘Don’t Talk To Strangers’, Judas Priest’s ‘Before The Dawn’ and Manowar’s ‘Mountains’. Don’t know if the last one is a ballad, but it is very cool anyway hahaha. But many mention ‘Bridge Of The Blind’… I’m very happy for that. I like it too.

Of course the doom riffs reign as well as the amazing guitar soling. A mighty achievement is the solo of Tony Iommi (Black Sabbath) in ‘Astorolus’. Please tell us everything about your affinity with Iommi and how you managed to get him playing on the album?
We asked hahahaha! Seriously. We asked, and got a yes! Our manager emailed his personal manager. Couldn’t believe it when we had the positive answer back. I was over the moon! Tony Iommi will play on my song! Hardest thing was to keep my mouth shut for three months hahaha. But you know, if you aim for the stars, well, you might succeed. For me Tony Iommi is the best and most influential guitarist/songwriter on the planet. Him playing on one of my songs is mind-blowing!

Did you record the album at Polar Studios again? Please tell us a bit more about the recording process and about eventual extern forces qua production, sound engineer, etc.
Everything was recorded at Marcus new studio. The whole shabang is called Hagaton, and Marcus his studio (inside Hagaton) is Deepwell. It is really an expanded rehearsal space, but with good microphones and a built in box in the recording room = great sound. We experimented a lot with the guitar sound, which I think is excellent on the record. We, well Marcus, also borrowed extra microphones for the drum recording, he also had a person there who’s a pro drum tech that rents drum stuff to the different studios around Stockholm, so he came and helped tune the drums and different snares etcetera to get an optimal sound. So we cut absolutely no corners with this recording. I think that’s the secret to a good record. Take the time, don’t take cheap shortcuts, do it all by the book!

Are there, in addition to Iommi, other guest appearances? (I think of the organ for instance, played by Carl?)
Dr. Carl plays on a couple of songs on ‘The Door To Doom’. Rickard Nilsson from Avatarium also plays on the album. But this time around we didn’t want to have so many keyboards on the record. It had to be a raw album with no round corners. More guitar, less keys!

Before the show in Antwerp, you visited a record store I see. Was it fun? Did you find or buy anything special?
For my wife I bought a collection of French 70’s disco on vinyl, and for myself a nice early UK press of ‘Ummagumma’ (Pink Floyd). Not very metal, I know, but cool anyway. Good vinyl shops in Antwerp!

I see you are booked for quite a lot Summer festivals. Any other plans on suitable touring?
Hopefully a tour in Japan this year and a couple of weeks in the States. Will be a pretty busy, but fun year for Candlemass. The album seems to be a success.

To occlude: can you shine a light on your activities with possible other bands or projects of you (like The Doomsday Kingdom)?
Besides a couple of tracks written for the new Avatarium album, not much. I’ll be busy with the C-mass stuff this year and also probably next. But I would love to do another Doomsday Kingdom record. Great band and great guys! When I have some time left.

7 Miles To Pittsburgh – Revolution On Hold