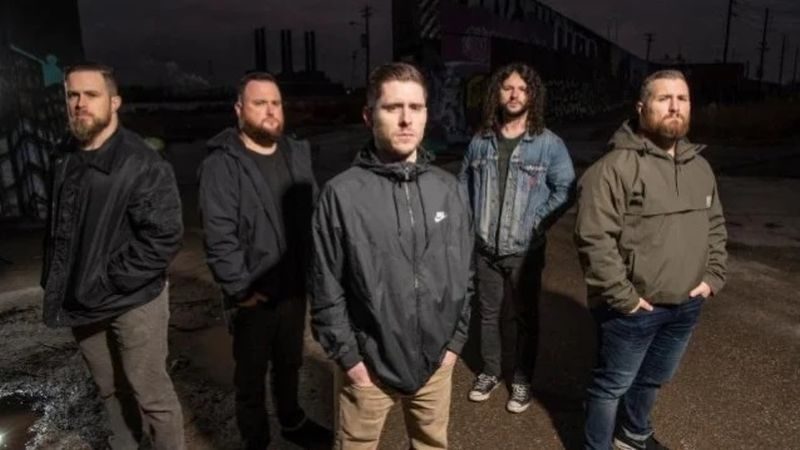 In a new interview with Terry “Beez” Bezer of Knotfest.com‘s “Mosh Talks With Beez”, WHITECHAPEL guitarist Alex Wade spoke about the cancelation of the band’s touring plans amid the coronavirus pandemic. He said (see video below): “I definitely feel like we got kind of cut short as far as the album cycle for ‘The Valley’ goes. But we’re trying to make the best of it that we can. We had a lot of killer tours and everything lined up this year. But it is what it is, and we just kind of have to roll with the punches.

“We made the best of a bad situation, and we ended up writing another album,” he revealed. “So we’re gonna be going into the studio this week, actually, and we’re gonna start production on that. I think, truly, if we would have ended up going on all those tours that we wouldn’t have had the time to dedicate to making the best album possible, but since we were all sitting at home on our ass, we were able to make a really killer record.”

Wade also talked about Phil Bozeman‘s increased emphasis on clean vocals on “The Valley” gave him and his bandmates the confidence to pursue other musical areas on the upcoming LP.

“I definitely feel like ‘The Valley’ opened up kind of like a floodgate of options for us to be creative and new avenues that we can explore, so there’s definitely gonna be quite a bit of that on the new record,” he said. “But no worries — there’s still gonna be tons of heavy material, classic kind of WHITECHAPEL sounds.

“I think that’s what’s great about the point that we’re at in our career, is that not only can we kind of recreate those old sounds to keep the die-hard fans happy, but we can also venture into newer sounds that can potentially put us in front of a newer audience,” he said.

According to Wade, WHITECHAPEL‘s move into a more melodic direction came about in a completely organic way and was something that he and the rest of the band had contemplated for some time.

“Whatever we do, we always to make sure that it comes from a genuine place,” he said. “We never want to write something that feels forced. Like, if we write something and it’s just not really fitting the vibe of what we’re going for, we have no problem scratching it. We’re not the type of band to try to create a sound like that to just try to get bigger, or something like that. For us, it was a very natural progression.

“Obviously, in the music that we’re creating, you can hear heavy influences of TOOL and A PERFECT CIRCLE and stuff like that, which, those have been Phil‘s favorite bands since he was 14 or probably even younger ,” Alex explained. “It’s not like we’re just coming out of the woodwork with this sound, saying, like, ‘Oh, this is our new sound.’ This is definitely something that we’ve been interested in for quite a while, so it’s good to see us kind of bring it to fruition.”

Earlier in the summer, WHITECHAPEL announced its rescheduled “Burn To Emerge” USA tour with AS I LAY DYING and SHADOW OF INTENT. Originally planned for May/June 2020, the trek was cancelled due to COVID-19; any tickets purchased for these initial shows will be honored at the rescheduled dates, which are now set to take place in February-March 2021.

METALLICA’s ‘Helping Hands’ concert to be livestreamed on PARAMOUNT+

The Temple – Of Solitude Triumphant

In The Woods – Diversum