VISIONS OF ATLANTIS return strongly with their most recent studio release, Pirates in 2022, followed by extensive touring through Europe and the US. There’s no time to rest for the Pirates, so they start 2023 with the release of a new official music video for “Clocks” .

VISIONS OF ATLANTIS on “Clocks”:

Clémentine Delauney: ”We are so excited to be able to release a video for ”Clocks” as we love this song and we noticed that it quickly became one of our fans’ favorites as well! We could tell from the crowd’s response every time we started to play this song live last year! So here is a fun portrait of what enjoying life as a pirate can be about, remembering the clock is ticking… Let’s all make a golden play out of 2023!”

Michele Guaitoli: “We couldn’t have a better way to celebrate this new video release than with a tour announcement! Our 2023 won’t only start with our first headlining US tour, that will see ‘The Spider Accomplice’ as special guests, but we’re also announcing another European round in cities we couldn’t reach during the previous run! Autumn Bride will join us for this new adventure…and believe it or not, more news will follow!

With its eighth full-length album, VISIONS OF ATLANTIS delivers its most confident and honest record so far, proving that they have definitely stopped wandering to finally unleash their rebellious side and a free spirit as untamed as the seven seas.

VISIONS OF ATLANTIS comments: “Being a pirate to us is being fully aware and having our lives in our own hands, living and thinking freely, embracing life as an adventure with all its light and darkness.

“With the new album, we are opening a new era for VISIONS OF ATLANTIS, fully embracing the identity we have been flirting with for several years now — making the music that truly resonates with our souls. We continue our journey taking us through darker waters, heavier storms, where all serves as background for a metaphor about personal growth and spirituality. If ‘Wanderers’ was more about the bright side of our path, ‘Pirates’ definitely takes us deeply into shadow work, where we are facing other kinds of monsters along the way.”

The album pulls the anchor with the epic opener “Pirates Will Return”, which instantly enchants with its hymnlike chorus and showcases the high-class versatility from the very first second. In the blink of an eye, VISIONS OF ATLANTIS manage to create their very own incomparable universe of symphonic epicness, intense riffing and, above all, the impressive vocal symbiosis of Clémetine Delauney and Michele Guaitoli. Delauney‘s bewitching offerings oscillate between clear vocals, powerful belting and operatic techniques, whereas matchless counterpart Guaitoli adds spice with top-notch power metal infusions. “Pirates” presses ahead with catchy hook lines, like in mighty “Melancholy Angel”, rousing “Clocks”, charging “Wild Elysium” and majestic “Master The Hurricane” — the latter of which will make every symphonic metal enthusiast’s heart pound faster through its perfectly balanced mixture of dramatic choirs, heavy orchestration and dedicated vocals. “Pirates” reaches the harbor for now with mesmerizing “I Will Be Gone”, building up a dramatic wall of sound accented by harmonizing flutes and bagpipes, delivered by no less than FEUERSCHWANZ virtuoso Ben Metzner, who joins also on “In My World”, “Master The Hurricane” and “Heal The Scars”.

The single comes just in time for the band’s announcement of their Pirates Over Europe tour, featuring support from Autumn Bride, and kicking off in Germany on April 4. 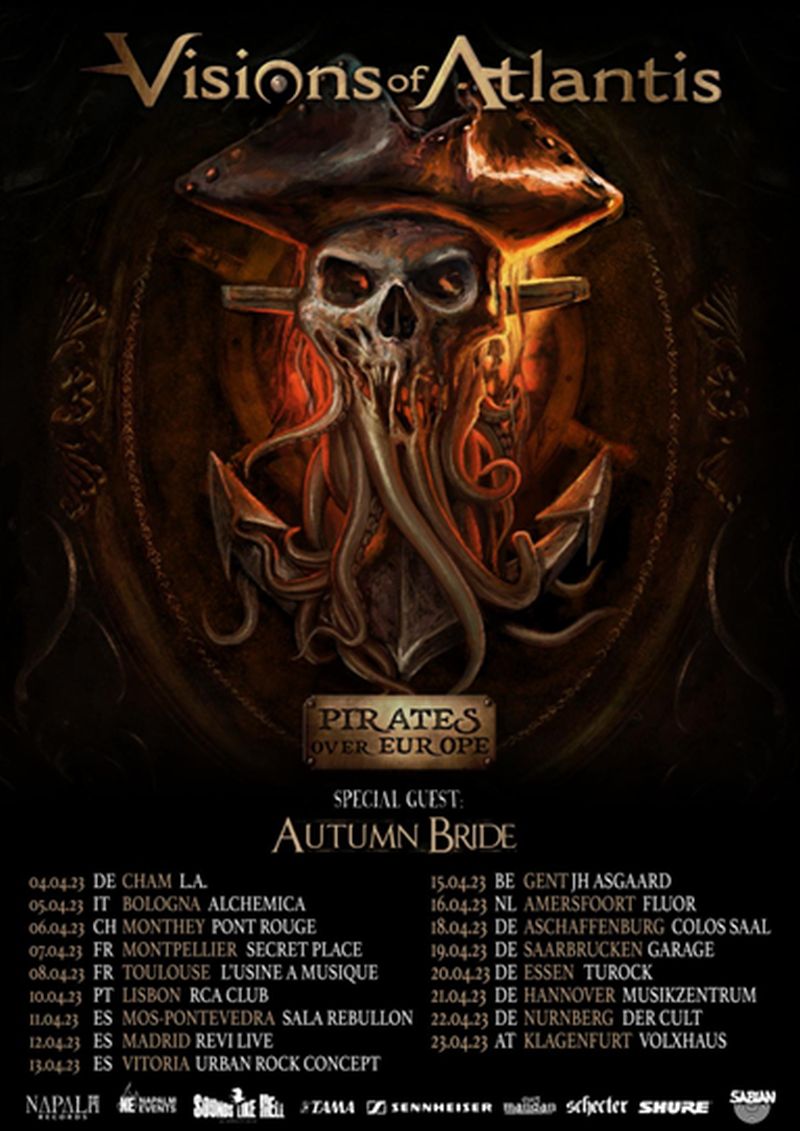