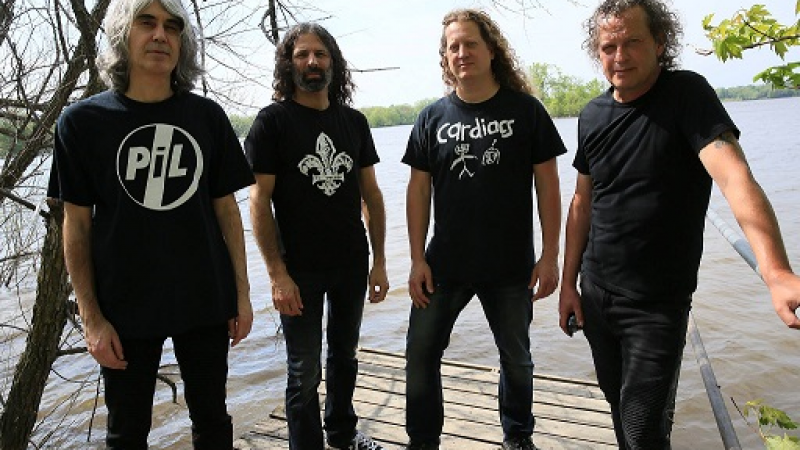 In a recent interview with The Metal Voice, VOIVOD singer Denis Belanger (aka Snake) revealed that the band is currently working on a documentary about the band. The Metal Voice spoke to the Voivod singer prior to the band hitting the stage on June 30 2019 at the Montreal international Jazz Festival at Club Soda.

“Originally it was Sam Dunn who started it a long time ago. I don’t have much information right now but it’s going to be about our career, so far which has been a long journey. The documentary will hopefully include footage from all of our line ups throughout the years. The documentary is still in the works. “
When asked about transitioning from harsh vocals to clean vocals over the years
“When we started doing more complex structured songs like during the album Killing Technology, I started working more on melodies, it was a natural progression. When we did the album Nothingface I really started being more profound on working on my voice. Today my style is more of a combination of clean and harsh depending on the mood of the song. The music inspires the whole process.”

When asked about the progress on a new album by Voivod,  the follow-up to last years album ‘The Wake’
“We’re  are still at the beginning stages of a new album, we were putting ideas together while we are on tour  but we never got back to those ideas because we have been so busy lately. When we were touring, we would go in the back of the tour bus with the laptop and we would lay down ideas. Not sure about the musical direction yet we will see how it goes. Our last album ‘The Wake’ was a good transitional album from our EP, Post Society, we wanted to go further with the Wake and we did, the same musical direction as the EP, but more elaborate and more complex. It is going to be tough to top ‘The Wake’,  it will be quite a task but we will go with the flow.”

PANTERA rumored to perform at KNOTFEST BRASIL 2022 in December