NEW YEARS DAY vocalist Ash Costello has confirmed that she is now engaged. Jered Boeving proposed to the singer on (how suiting) New Year’s Eve at Disneyland in Anaheim, California. Costello and Boeving have been dating for less than a year after initially crossing paths in 2016. Ash broke the news of the engagement in an Instagram post, crediting Jered with turning her 2019 “from a nightmare to a dream.”

She wrote:
“Well….. 2019 was wild. I had never experienced such highs in my career and business, but at the same time…my personal life was absolutely falling completely apart. But somehow, I am lucky enough to have caught in time and turned it all around. I brought in the new year with my friends I had lost and reconnected with and the man who turned my 2019 from a nightmare to a dream.

“Over 3 years ago, Jered hand made me a red and black coffin. I thought it was kind of a stranger to want to give me something so beautiful. I remember opening the package and being blown away by the thought and care he put into packaging it, red and black tissue paper? Wrapped beautifully? But we both had started seeing other people. We kept in touch over the years but had recently gone thru what sounds like an almost identical situation. Fast forward to [2019], when he shows up to one of my shows. He didn’t message me, he didn’t tell me he was there, I just happened to notice. We talked for hours that night, and we both agreed, after we said goodbye, we knew it was the beginning of forever. So [Tueday] night, at my favorite place on earth, Disneyland, on the front steps of my favorite ride, the haunted mansion, Jered asked me to marry him with a coffin shaped black diamond. And it felt like my world was put back together, FINALLY.“

She added:
“EVERYTHING is different when you glow, when you’re happy, when you’re supported and treated the way you need to be treated. When you can be 100% yourself. My band, my friendships, my family, my business are all thriving again because I am not only just happy, but FREE to be myself completely. He’s been so kind and caring, loving and generous, everything I wished I could find and just hadn’t yet. Our close friends and family saw this coming and are not surprised, but we haven’t shared much of our story on social media, so I know to most this may seem sudden, but when you know, you know.

“So thank you guys for being along for the ride of 2019, I know it’s been crazy, I appreciate your support and love and wish you happiness in 2020! Don’t ever give up or settle for less in any aspects of your life!“ 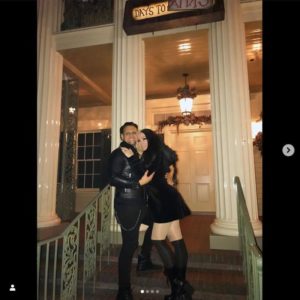 NEW YEARS DAY’s latest full-length album, “Unbreakable”, came out in April. The band’s fourth studio album was produced by Mitchell Marlow (ALL THAT REMAINS, IN THIS MOMENT) and Scott Stevens (HALESTORM, SHINEDOWN). It is the follow-up to NEW YEARS DAY’s 2015 LP, “Malevolence”, which includes radio hits “Defame Me” and “Kill Or Be Killed”.