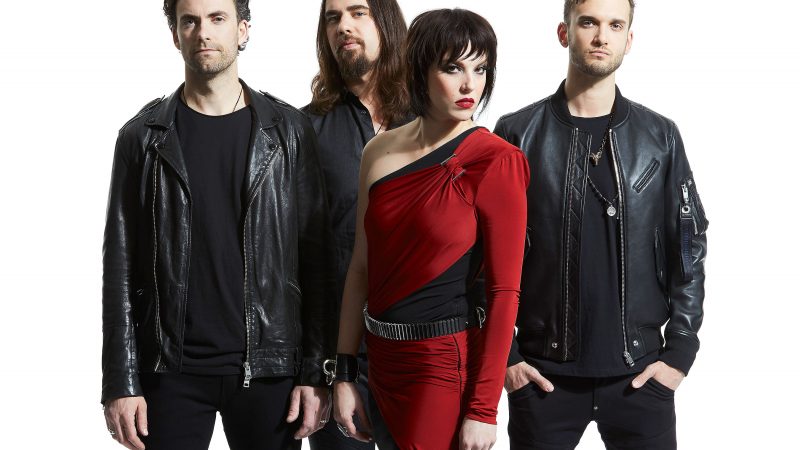 HALESTORM frontwoman Lzzy Hale spoke to “The MetalSucks Podcast“ about the progress of the songwriting sessions for the band’s follow-up to 2018’s “Vicious” album. In the interview, she revealed that the band commenced the recording process of a new album, after having released an EP last year.

“We started demoing for this record in the middle of our last record cycle, when we were still on tour. I was in our practice room every day on tour, with my amps and everything, I would just force myself to write something every day. So, when we finally got to the point where we were, like, ‘Okay, let’s see what we’ve got,’ we all sit down and go, ‘That one beats that one.’ It’s very much like having this thousand-piece puzzle, and you dump it all out. And you’re, like, ‘Okay, I know it all goes together’ (laughs), ‘but I don’t know what the picture it yet.’

“So we’ve been piecing stuff together,” she continued. “We actually just — this week — ended up doing this socially distant version of getting into the studio with our producer. So we’ve actually begun recording. And so that’s exciting. It was a much-needed change of routine. We’re pulling in about 14-hour days. (Laughs) We go in and we’re, like, ‘All right. It’s almost 11 o’clock. We probably should go home and get some sleep, so we can come and do it all over again.’

“So, yeah, it’s exciting,” Lzzy repeated. “We’re working on a new record. I love this new material, and I’m super excited to get to the other side, whenever that may be.”

This past September, Lzzy confirmed to U.K.’s Rock Sound that she has been using her coronavirus downtime to compose material for the new HALESTORM LP. “I’ve been writing, honestly, some of the best songs I’ve ever written, because I’ve just had the time, and there isn’t any deadline and nobody’s breathing down my neck, saying, ‘Hey, where are those demos?’,” she said.

“I haven’t been home without a gig for this long in probably over 15 years, so that’s a strange thing. I think in one way, I have the time, but in another way, I’m seeking that high out, I’m seeking that joy that I find from playing out live every night. I’m not writing for any other reason — I’m not writing for a deadline, I’m not writing for a record, even though technically I am; we are technically working on a new HALESTORM record. But I’m writing from such a position of joy right now, literally just getting excited about some small piece of music. And I’m taking more risks now, because I have the space and the time and I’ve settled into something. And I’m not even quite sure what that is, and I feel like it’s gonna reveal itself maybe later, but right now, I’m in it, and it’s exciting.”

“Halestorm Reimagined”, a collection of reworked HALESTORM original songs as well as a cover of “I Will Always Love You”, the love ballad made famous by Whitney Houston and Dolly Parton, was made available in August.

Lzzy and her brother Arejay (drums) formed the band in 1998 while in middle school. Guitarist Joe Hottinger joined the group in 2003, followed by bassist Josh Smith in 2004.

In December 2018, HALESTORM was nominated for a “Best Rock Performance” Grammy Award for its song “Uncomfortable”.

LARS ULRICH: “it would take a lot of rehearsal to play RUSH songs

JAMES HETFIELD ’72 Seasons’ album inspiration: ‘there’s been a lot of darkness in my life’