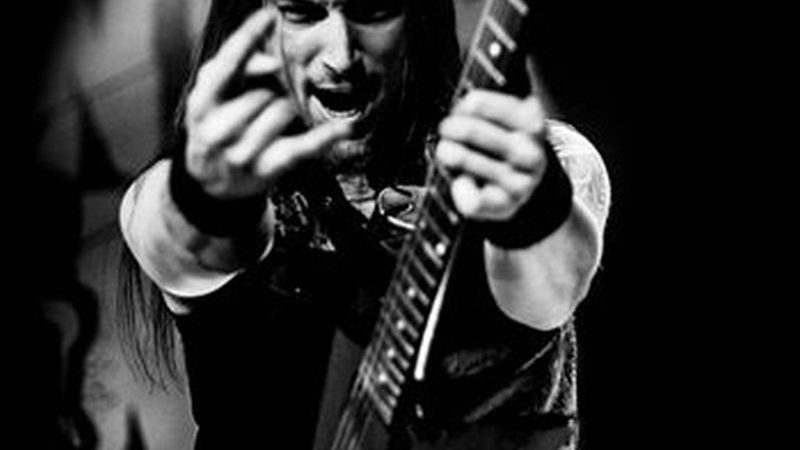 Hein Willekens, guitarist for Up The Irons and formerly of The Lucifer Principle and Legion Of The Damned, has issued a statement in which he announces his departure from thrashmetal band Splinterbomb. Earlier this year he stepped away from his spot in Dutch death metal bant The Lucifer Principle, who have yet to announce his replacement.

After a great weekend, we have some sad and important news to share today. Our riff machine, and more importantly our beloved friend Hein Willekens, had, after a long consideration and good talks together, to make the heavy decision to leave Splinterbomb after a fantastic 5 year musical rollercoaster. Our show at the Groene Engel on March 7 will be his official farewell and of course Hein also has a message for you:

To which Willekens added:

A band-aid should be pulled off quickly to make it less painful, right?
So, yeah, I’m leaving Splinterbomb…
There, I said it, and dammit, this is a very hard thing to do, but I’ve thought about it thoroughly. It’s not that I want to step aside, but I have so many ideas and I know that my ambition and drive are different than from my companions. Because personal priorities are different the willingness to do and don’t what it takes to grow and reach out to bigger stages, tours etc. is not the same as well, and I understand and respect that. I’ve thought of pushing things even harder than I did before, but at what cost? Losing my friends is not on my wish list, at all, so there’s just one option left… to go my own way. Fortunately this does not mean the end of the band, because the guys decided to find a new guitarist and continue the adventure. Before heading into new directions I will play one last banging show on the 7th of March at De Groene Engel in Oss!

I realise many people will be surprised and wondering why I leave a band that I built up and put so much effort in. The anwer is simple… again, my friends are more important and because we started this band as friends I think it’s fair to keep that value in mind at this point too.

Two years ago when leaving Legion of the Damned I already mentioned a new project that I had in mind. This new thing has been growing to a full concept. I feel the time is now, and I need to bring it into reality.
It will take some time to build this up, but I can already reveal that you can expect the same heavy groove as you hear in Splinterbomb, but with a different, wider approach on metal music. In the meantime I’ll still be playing a lot of shows with Up The Irons, as well as session gigs and projects. The difference is that at those things I just have to be present and play music which is a whole different kind of story than being the driving force behind a band, writing music, organising events, arranging tons of stuff that need to be done, which I obviously will do in this new act.

Very important to me is to say thank you, to many people.
First and foremost I want to thank Michel and Jordy for being my partners in crime for the past five years. A big thank you to Stef too, he earned his place in the band as new bassplayer and great dude. And Arian and Dappers, my former band buddies, thanks so much guys, this was a good ride!
Special thanks also to Tiemco and Daan for helping me make my guitars sound as fat as a frikandel with mayonaise 😉
And of course I couldn’t forget the ambassadors. Diesmer, Bilal, Paola and Eric, big hug and thanks a million to you guys!
A last expression of gratitude is for all the people who support the band at live events, shared the stage with me, or even said I’m a nice guy or just a noisy douchebag… thank you all!

Take care everybody! Be kind to one another, and we’ll keep in touch and see each other around”!

Ps. More news will be following later this week!

Al scheduled shows will go ahead as planned.