Watch the video for Symbol of Salvation Live below.

The CD/DVD is available for pre-order in the following formats: 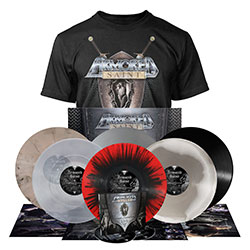 “It links our past to our future,” says lead singer John Bush. “I believe it was the time that we honestly thought we could do whatever we wanted to musically and it would somehow work. There’s a magical feeling about it and it continues to gain mystique every year.” However, the band went through some adverse times while initially writing the songs that would make up the record, being without a label for three years prior to signing with Metal Blade, and in 1990 – before they headed into the studio – losing founding guitarist Dave Prichard to leukemia. This ultimately served to light a fire under the band, pushing them to deliver their very best. “Because we had lifted ourselves out of these ashes, as it were, we felt a very strong desire to make every little thing count,” elaborates Vera. “It felt more important than anything we had ever done before. For one thing, we didn’t want Dave’s writing contributions to be in vain. Also, we were on a mission to let the world hear what we’d been working on for three years. Funny thing is, that during the separation of the metal genre between glam and thrash from ’85 to ’89, we kinda felt like we had to prove something to everyone else. But while making ‘Symbol’, we also had something to prove, except this time, we had to prove it to ourselves.”