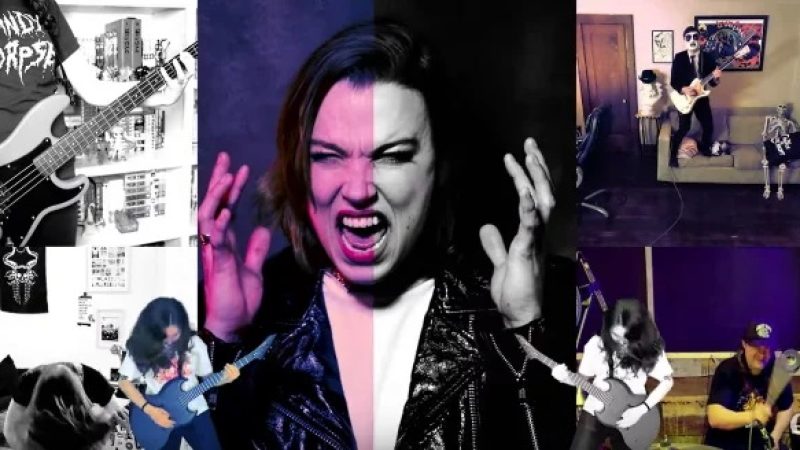 “Two Minutes To Late Night”, which bills itself as the world’s only heavy metal-themed talk show, has uploaded a cover version of the PANTERA song “Mouth For War” recorded in quarantine by members of HALESTORM, CODE ORANGE, BARONESS and CONVERGE.

Says “Two Minutes To Late Night”: “Gina wanted to cover PANTERA so we covered the crap out of PANTERA! All of the artists involved with this video will be donating their payment to Dallas Hope Charities Transitional Living Center.

“This is our 36th bedroom cover made with the support of Patreon. With so many musicians stuck at home with no outlets, we’re going to keep producing these style videos and use the Patreon to give some money to everyone who has a part in them. Please support our friends by donating to our newly redone Patreon.”

This past September, Lzzy confirmed to U.K.’s Rock Sound that she has been using her coronavirus downtime to compose material for the new HALESTORM LP. “I’ve been writing, honestly, some of the best songs I’ve ever written, because I’ve just had the time, and there isn’t any deadline and nobody’s breathing down my neck, saying, ‘Hey, where are those demos?’,” she said.

“I haven’t been home without a gig for this long in probably over 15 years, so that’s a strange thing. I think in one way, I have the time, but in another way, I’m seeking that high out, I’m seeking that joy that I find from playing out live every night. I’m not writing for any other reason — I’m not writing for a deadline, I’m not writing for a record, even though technically I am; we are technically working on a new HALESTORM record. But I’m writing from such a position of joy right now, literally just getting excited about some small piece of music. And I’m taking more risks now, because I have the space and the time and I’ve settled into something. And I’m not even quite sure what that is, and I feel like it’s gonna reveal itself maybe later, but right now, I’m in it, and it’s exciting.”

“Halestorm Reimagined”, a collection of reworked HALESTORM original songs as well as a cover of “I Will Always Love You”, the love ballad made famous by Whitney Houston and Dolly Parton, was made available in August.

Lzzy and her brother Arejay (drums) formed the band in 1998 while in middle school. Guitarist Joe Hottinger joined the group in 2003, followed by bassist Josh Smith in 2004.

In December 2018, HALESTORM was nominated for a “Best Rock Performance” Grammy Award for its song “Uncomfortable”.