HALESTORM returns with single 'Back From The Dead' 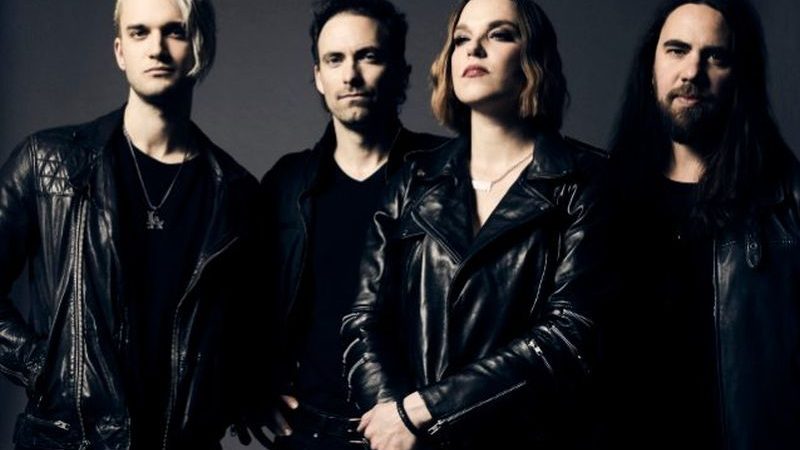 HALESTORM has released a new single, “Back From The Dead”. The track is taken from the band’s upcoming fifth full-length album, due in 2022. The video for “Back From The Dead” also premiered this morning via YouTube. Directed by Dustin Haney (Noah Cyrus, Luke Combs) and produced by Revolution Pictures, the clip features frontwoman Lzzy Hale and the rest of the band in a morgue and cemetery somewhere between life and death.

Watch “Back From The Dead” below.

Lzzy says: “‘Back From The Dead’ is about survival, not in a physical sense, even though I know we all have been touched by death especially these last few years. This song is personal and written from a mental health perspective. I wanted to give myself and the world a hard rock song we could shout out loud as the gates opened again. I was on the edge of this world getting completely lost in oblivion, but even though it was the harder of two choices, I didn’t just let the darkness and depression in my mind dig me an early grave. I didn’t just sit and let it take me. I’ve erased my name from my headstone, so save your prayers, I’m back! I hope this song, as I pass it on to you, reminds YOU of your strength individually and that you are not alone.”

She continues: “The video was so much fun to film! Dustin Haney is an amazing director. Dustin and his team really helped bring my words to life and the video is one of the most cinematic pieces we’ve done in years! I hope this song, as I pass it on…reminds YOU of YOUR individual strength and that you are not Alone. Raise your horns!”

By breaking rules, bucking trends, and busting down doors, HALESTORM has surged through rock ‘n’ roll on a singular path without compromise or apology. Along the way, the Pennsylvania-bred and Nashville-based quartet — Lzzy Hale (vocals, guitar), Arejay Hale (drums), Joe Hottinger (guitar) and Josh Smith (bass) — has collected a Grammy Award, scored successive number ones at radio, garnered multiple gold and platinum certifications, and performed to sold out crowds on five continents.

Going against the grain again in 2021, the band weathered the flames of chaos in 2020 and returned stronger than ever with their most empowering and undeniable anthems to date.

“Throughout the pandemic, I was writing a lot of melancholic and hopeless songs about the ups and downs of the world,” admits Lzzy. “I’ve been in this group longer than I haven’t been in it. We’ve always had shows. Even when I was 13 years old, we had a couple of bowling alley gigs once a month. This was the first time I didn’t know if we would ever play again. However, I started to use music in the same way I did as a teenager—to get myself through this situation that was plaguing us all. I sidestepped and said, ‘Let’s keep our heads up, get our attitude back, be a light in the dark for a second, and celebrate the fact we’re surviving and there’s hope for the future.’ So, we started to write songs that were a reminder to ourselves of who we are and what we’re capable of. That became the mission statement.”

In a way, it’s always been the mission statement…